For the last 3 years I have been wearing contact lenses instead of glasses. I love them, as I found that glasses don’t look very good on me – and people now remark that I have beautiful eyes. Thanks people!

But in the last 9 months I have had chronic redness in one of my eyes – always bloodshot and irritated. This is really bad for one’s appearance and it was worrying me because I haven’t been for an optometrist checkup in a while. I was worried about the health of my eyes. In the mornings before I put in my lenses my eyes would be white and clear and then after an hour of wearing the lenses the left eye would become bloodshot and very red. This started getting only worse over the last few weeks.

I am using Acuvue Advance with Astigmatism which I usually wear daily for about a month, taking them out and cleaning them every night. I noticed that the first day after putting in a new pair of contact lenses, my eyes were white and clear the whole day. But the second day and subsequent days, my eyes would be red again.

In short, I found the solution to my redness problem!! I am so happy and I want to share it with you.

Who knew it could be so simple! Now I don’t look like a fire eye’d boy no more! 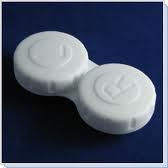